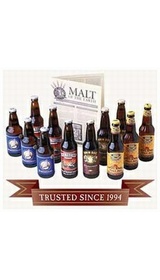 Since its establishment in 1994, MonthlyClubs.com's Microbrewed Beer of the Month Club has worked to distinguish itself from competitors in the beer club industry. MonthlyClubs.com (formerly known as C&H Clubs) claims to have the most formal selection process of any beer club and only approves less than 30% of the beers they test (~1000 breweries). Its panel of brew masters and beer experts are committed to offering the best variety of premium craft beers, and, unlike other beer clubs, MonthlyClubs.com has been so proud of its selections each month that they have all been archived on the club's website since 1995.

MonthlyClubs.com offers four different membership options based on whether you'd like a selection of all domestically-produced craft beers, all imported ones, a combination of the two, or a mix of rare microbrews from US and international breweries. Under the first three membership options, each shipment you receive will contain a total of twelve standard size bottles (twelve ounces) with two or four different styles of beer from two separate breweries. Members of the Rare Beer Club will receive shipments of two, four or six 750-ml bottles with at least two different styles of beer from two different regions. A copy of the beer club's newsletter, Brew Harvest Review, is also included in every shipment. The newsletter's main purpose is to provide some background on each of the breweries, tasting notes on the different beers and suggestions for food pairings, but it also has some other fun tidbits we've detailed in the section below.

All of the memberships feature very flexible ordering, delivery scheduling and payment options. While the minimum commitment is two months, you can order up to twelve shipments (in one shipment intervals) or leave your membership open-ended with the ability to cancel at any time. Then, you can specify whether you want to receive deliveries on a monthly, bimonthly or quarterly basis. Finally, you can pay for your entire membership in one installment or you can arrange for your credit card to be charged just before your shipments are sent. MonthlyClubs.com also makes it easy for customers to reorder any of their favorite beers at a discounted rate right on their website. Finally, MonthlyClubs.com also allows customers to leverage its other club offerings and pair their beer club orders with wine, cigars, cheese, chocolate and flowers.

We give MonthlyClubs.com’s Microbrewed Beer of the Month Club an A- because it features a great selection of domestic, imported and rare beers, its newsletter is fun and informative, it publicly archives all previous beer selections, and it offers its members a 100% satisfaction guarantee. We also love the Design Your Own Club™ program where you can customize your membership and combine it with any of MonthlyClubs.com’s other clubs (wine, cigars, cheese, chocolate, and flowers). We deducted just a few points because they require a 2-shipment membership minimum.

Products
A panel of master brewers and beer experts carefully select a wide variety of domestic and/or international microbrews from award winning breweries.
Quantity
The minimum membership requirement is 2 shipments. Rare Beer Club members will have the option of receiving individual shipments of 2, 4 or 6 750-ml bottles, while other club members will just receive 12 longneck bottles in each shipment.
Membership Options
All customers will choose between 2 - 12 shipments or an open-ended membership and whether they want to receive deliveries on a monthly, bimonthly or quarterly basis. The four membership levels are detailed below:
Cost per Beer
After you factor in shipping costs, the Original Monthly Beer Club is $3.09 per beer, the International & Domestic Variety Beer Club is $3.58 per beer, and the International Beer of the Month Club is $3.91 per beer. These costs are fixed, and there is no discount to incentivize customers to buy longer memberships. The Rare Beer Club, however, does offer an incentive to buy in higher quantities. The 2-bottle option averages out to $22.48/bottle, the 4-bottle option averages out to $16.74/bottle, and the 6-bottle option averages out to $14.49/bottle.
Newsletter
As part of your membership, MonthlyClubs.com will include their monthly newsletter, Brew Harvest Review: Malt of the Earth, in each shipment. In addition to providing information on the breweries and beer selections, the newsletter will also include festival listings, reviews on brewpubs and microbreweries, fun beer trivia, and interesting articles submitted by beer industry writers.
Gift Information
All gift purchases will include a free customized gift notification that you can have emailed to the recipient on a specific day or that you can print and give to them yourself. Please note that you have to manually generate this notification on the website. It is not automatically generated for orders placed online.
Shipping Schedule
Shipments are sent out between the 15th and 25th and can take 7-10 days for delivery. As mentioned, you can opt to receive shipments every month, every other month or every three months.
Satisfaction Guarantee
MonthlyClubs.com offers a 100% satisfaction guarantee. If you are unhappy with the products in any way, MonthlyClubs.com will replace them or refund your money.

While the MonthlyClubs.com beer clubs don't have any consolidated customers reviews on independent (unbiased) websites, I did read a few very positive individual reviews on the club, and MonthlyClubs.com (formerly C&H) itself appears to be a reputable company that has maintained an A+ rating with the BBB since 1994. The multiple membership levels with domestic and imported options, along with the flexible ordering, payment and delivery schedule make this beer club an excellent gift to give yourself or another beer lover in your life. We would suggest purchasing a few months of the International & Domestic Variety Beer Club membership. This club has the broadest and most exciting variety of microbrews to taste. The Rare Beer Club membership carries a certain cachet, but it is definitely more for the beer connoisseur. While one individual review I saw was pretty negative, the editors at DrinkCraftBeer.com were more impressed with some of the selections in this club- "While I'm not one for ranking beers, I can definitely see why Porter Baltique won "World's Best Baltic Porter" at the World Beer Awards. This thing is phenomenal!" The editor goes on to say that he wouldn't want to drink a lot of it but that he enjoyed the little taste he had. Overall, it sounds like selections are pretty unique/amazing, but the flavors may be a bit too overwhelming for the casual beer drinkers.

Clubs of America Beer of the Month Club

FAQ for MonthlyClubs.com Microbrewed Beer of the Month Club